It is often said that “bull markets climb a wall of worry” and there was plenty to worry about after the market’s performance in the fourth quarter of last year – the never-ending trade negotiations, slowing global economic growth and declining corporate earnings, just to name a few. All of these were and continue to be legitimate concerns, but they are not eliciting the same recession fears that they were a few months back.

By and large, U.S. equity indices are back to where they were seven months ago. The Nasdaq and S&P 500 have eclipsed their previous all-time highs set back in August and September, respectively. All the while, the U.S. Treasury curve remains inverted with all maturities from the 1-month T-bill to the 1-year T-bill trading at a higher yield than the T-notes maturing within the next two to seven years. With 78% of S&P 500 companies having reported first quarter earnings, the blended growth rate stands at a decline of 0.83% for year-over-year earnings growth, which would mark the first decline since the second quarter of 2016. And lastly, many economic data points continue to negatively surprise to the downside as measured by the Citi Economic Surprise Index. 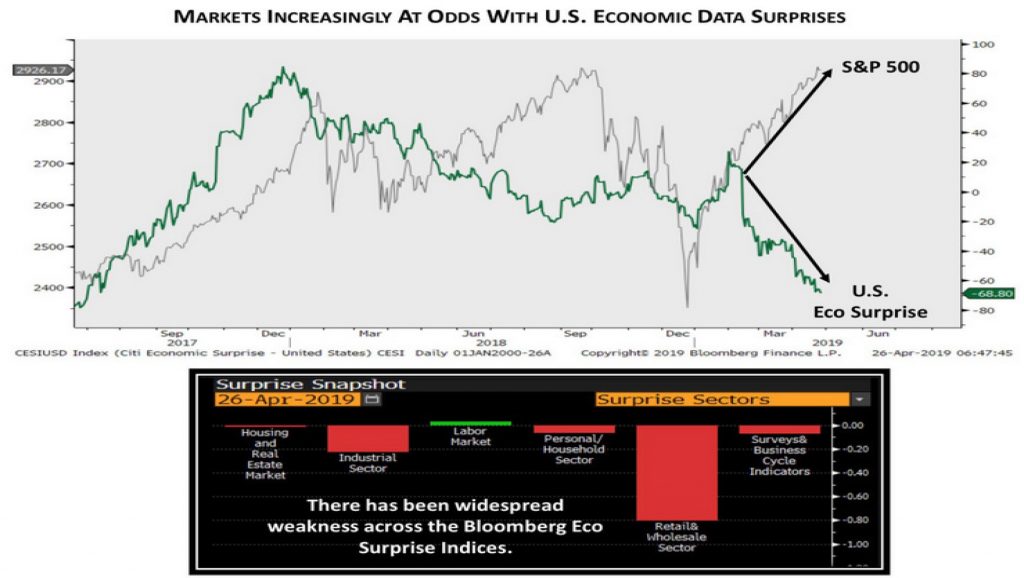 The most recent direction in stock prices has a funny way of setting market narrative and this time has been no different. Despite a similar economic and corporate earnings backdrop at the beginning of the year, increasing equity prices have seemingly allowed many people to ignore any financial market risks. In fact, some of the declarations and positioning made over the past several weeks have been a bit unnerving.

“I don’t see a world in which we have any form of meaningful contraction nor any form of meaningful expansion. We have completely taken away the toolkit of how normal economies should work when we started with QE. I mean, the odds that there’s a recession anymore in any Western country of the world is almost next to impossible now, save a complete financial externality that we can’t forecast.”

Now that people are dismissing the notion of a business cycle, the ability for a country to enter a recession and speculators all but betting the house that volatility will not rise in the near future, we might look back and conclude the “wall of worry” was officially breached in April 2019.

Since the inception of the Castle Tandem Fund (TANDX) on 3/15/2019, the S&P 500 has crept higher amid minimal volatility. As we’ve mentioned previously, when price moves in one direction amid painstakingly low volatility, we tend to make very few major changes to portfolio construction. And, the past 6 weeks have been just that. Over the past month and a half we have rounded out our Comcast (CMCSA) position to a full size and completed the liquidation of Cognizant Technology Solutions (CTSH). CTSH had previously announced the hiring of an outside CEO, which is a fundamental violation of our investment strategy.

Considering the S&P 500 is trading slightly north of 17x next twelve months earnings, which is historically on the higher side of valuations, there have been very few opportunities to deploy cash. In fact, 81% of our core holdings and the companies on our watch list are currently rated as “expensive” according to our quantitative model with 26% of these stocks trading at a statistically significant overvaluation. This doesn’t necessarily make them a “sell”, but rather it gives some insight into the lack of opportunities we are seeing to put some cash to work at attractive valuations.

On the earnings front, our core holdings continue to do what we ask of them – grow revenues, earnings and cash flow, which justify their ability to grow dividends. Last month, we highlighted the most recent dividend increases among our core holdings. This dividend growth was indeed justified by the solid Q1 results our core holdings have posted so far. As I mentioned earlier, the S&P 500 is currently flirting with potentially recording its first negative quarterly earnings growth in three years. With over ¾ of the S&P 500 having reported Q1 numbers, revenues are expected to grow 5.19% and EPS is supposed to contract 0.83%. Q2 estimates are not expected to fare any better with revenues growing at 4.47% and EPS declining 1.19%. Meanwhile, with over ¾ of our core holdings having also reported Q1 earnings, revenues and EPS are growing at 12.39% and 13.04%, respectively. Like the S&P 500, estimates for our core holdings are expected to slow a little next quarter; however, they are still expected to increase revenues by 11.83% and earnings by 7.70%.

The opinions expressed are those of the Fund’s Sub-Adviser and are not a recommendation for the purchase or sale of any security.

The Fund’s investment objectives, risks, charges and expenses must be considered carefully before investing. The prospectus contains this and other important information about the Fund, and it may be obtained by calling 1-877-743- 7820, or visiting www.castleim.com. Read it carefully before investing. Distributed by Rafferty Capital Markets, LLCGarden City, NY 11530.

The risks associated with the Fund are detailed in the Fund’s Prospectus. Investments in the Fund are subject to common stock risk, sector risk, and investment management risk. The Fund’s focus on large-capitalization companies subjects the Fund to the risks that larger companies may not be able to attain the high growth rates of smaller companies. Because the Fund may invest in companies of any size, its share price could be more volatile than a fund that invests only in large-capitalization companies. Fund holdings and asset allocations are subject to change and are not recommendations to buy or sell any security.