Stocks are certainly climbing a wall of worry. Despite trade concerns, escalating geopolitical tensions and a toxic political environment, stock prices have maintained their assault on the record books. This ability to shrug off concern is seemingly always the case in a bull market – particularly when the market’s gains are fueled by a benevolent Federal Reserve.

Interest rates really paint a nice picture of the volatility investors have faced. The 10-year Treasury is often used as a benchmark for rates, and in the last 18 months, the 10-year yield rose from 2.40% at the end of 2017 to a high of 3.24% on November 8th. This move in less than 11 months was pretty dramatic, representing a 35% increase in yield. Stock prices bore the brunt of this spike. The market perceived a robust economy, a possible return of inflation, and Fed rate hikes as far as the eye could see. 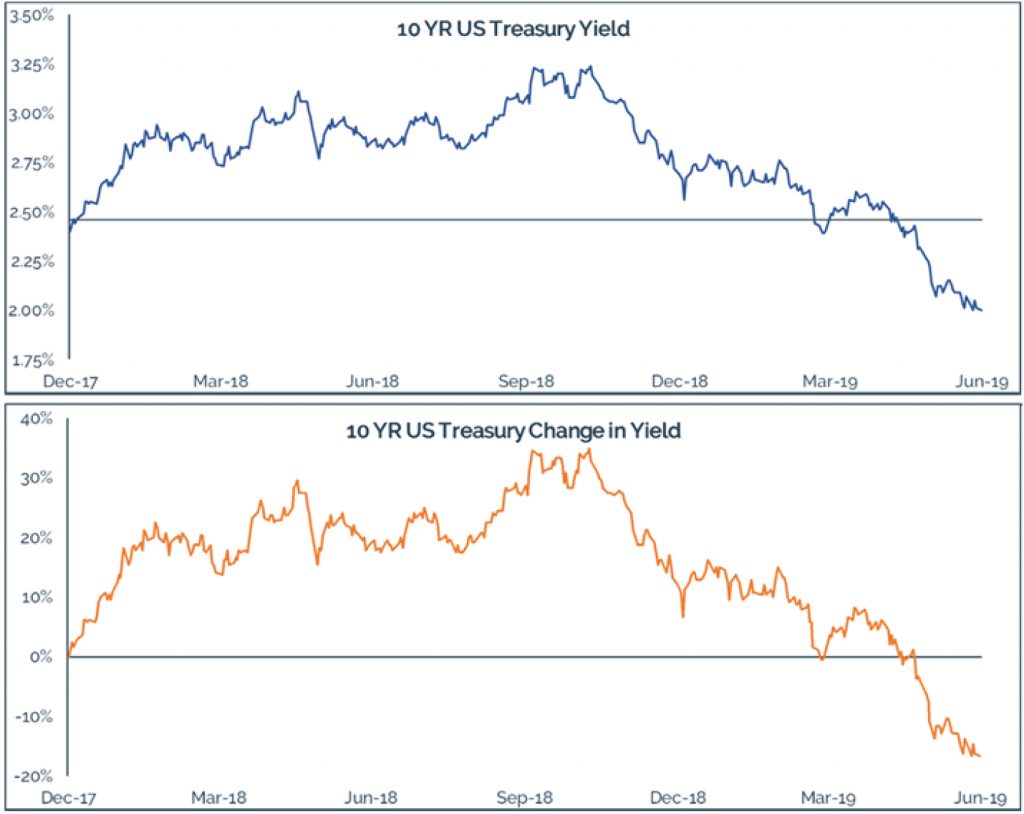 Declining interest rates, even in the absence of improving fundamentals, can sustain a stock market rally for a time. We have approached this market with caution, to be sure. Yet we have still been able to find value, albeit not nearly as much as 6 months ago. The rise and fall of interest rates and stock prices has created opportunities to add to our portfolio as prices decline, and to realize some hard-won profit when prices escalate.

The volatility has indeed been a gift so far. It is important to recognize that, at least to an extent, this volatility has been triggered by the divergence of expectation and reality. The further apart the two drift, the more violent the ultimate reconciliation will likely be. We are concerned that in this benevolent interest rate environment investors may become too complacent, inferring that rising prices imply reduced risk. In reality, low rates point to slowing growth. Slowing growth and rising stock prices can only coexist for so long before risk becomes obvious. Indices like the S&P 500 often reflect sentiment more than value. Sentiment rarely prices risk appropriately. If it did, Las Vegas oddsmakers would be out of business.

Bad News is Good News in a TINA World

In the real world, good news is good news, and bad news is not. In the often bizarre world of Wall Street, this logic does not always apply. Now is one such time.

The stock market is rallying to all-time highs again, and it is doing so at a time of growing concern about the economy, trade wars and slowing corporate profit growth. On the surface, this makes little sense. One would think that an uncertain future might put the brakes on stock prices.

In the second half of last year, the domestic economy appeared to be quite strong. So strong, in fact, that markets widely perceived several more interest rate hikes by the Federal Reserve to be in the cards. The Fed had already been hiking for awhile and the market had accepted that. After all, rates had been nearly zero for a decade. Hiking from zero wasn’t scary. But by the summer of 2018, rates had finally risen to a level not seen in years. Rates this high could potentially choke off economic growth, and perhaps worse, present an attractive alternative to stocks. By the time the Fed hiked again in December, the stock market was in full tantrum mode.

Not surprisingly, after the stock market’s dramatic December correction, the Fed blinked. They were scared they could bring an end to this 10-year economic and stock market expansion. So they halted. And over time, they began to indicate a willingness to not only pause future rate hikes, but actually begin to lower rates. In recent commentary, Fed officials have expressed growing concern about a potential economic slowdown, and rate cuts now would seem imminent. And so the market has rallied in anticipation of slower growth – and lower rates.

The chart below, from the Philadelphia Federal Reserve, indicates expectation of future economic growth. It is clear that expectations turn negative each time the U.S. economy has entered recession. It is also clear that the index does not presently point toward imminent economic contraction. But it is undeniable that the index’s trend is lower.

The Federal Reserve Leading Index for the United States 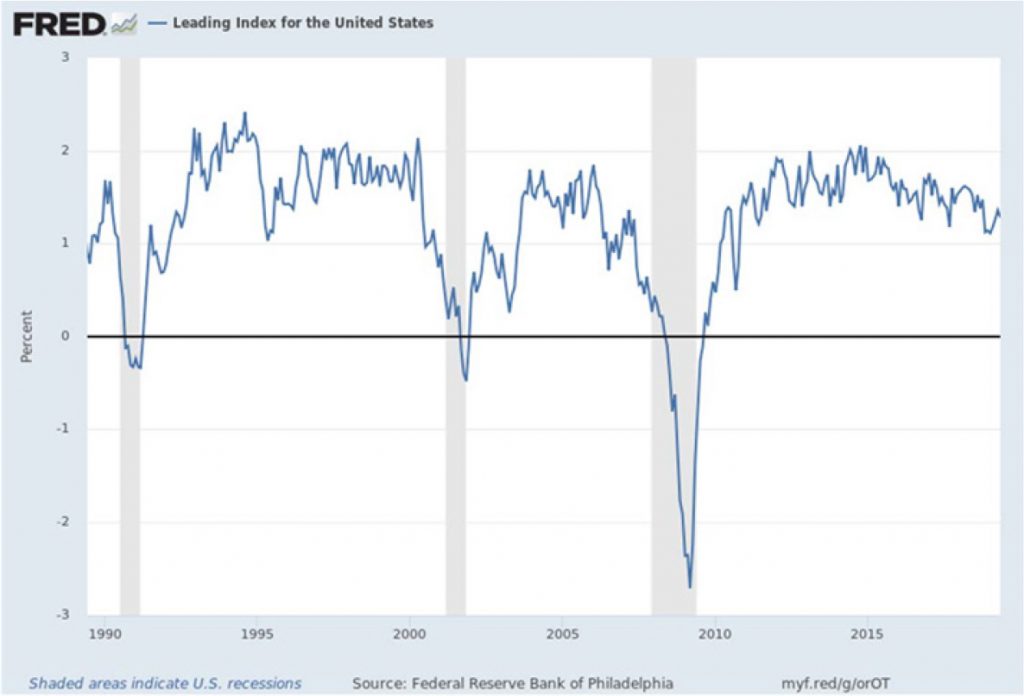 Slower growth isn’t really the driver of higher stock prices. Rate cuts are. Often times, as economic expansions or bull markets get a little long in the tooth (and this one is now more than 10 years old), it is natural for economic and profit growth to slow, or even go negative. And yet this doesn’t signal the immediate end of a bull market. Typically, economic growth drives profits, and profits drive stock prices. But in the absence of these factors, the Federal Reserve’s actions might support price gains through lowered interest rates.

Oddly, in times of exceedingly low interest rates such as now, a slowing economy is hardly a concern to investors. Instead, lower rates might serve to restimulate economic growth. Even if they fail to do so, lower rates still make stocks seemingly more compelling than alternative investments. In a world where stocks have little or no competition for investment dollars, stock prices can rise even when there are few fundamental reasons for them to do so. This phenomenon is know as TINA – There Is No Alternative. And we now find ourselves in a TINA world.

Whenever the market counts on lower rates to drive stock prices higher, bad news becomes good news. Bad economic data increases the likelihood that rates will be lower longer. Conversely, when data presents a picture of strength, as was the case last year and then again in May of this year, stocks sell off because rate cuts are less likely, and hikes become a possibility. Higher rates in this scenario could hold stock prices back. And thus, good news is actually bad news for the stock market. These historically low rates make for some confusing times.

Low rates may in fact be here to stay for awhile. And if so, then stock prices may be buoyed by this. Yet eventually, low rates in and of themselves will not be enough to sustain prices. Earnings growth must ultimately follow. The chart below on the left expresses the high degree of correlation between earnings and prices for the S&P 500. When earnings rise, prices follow, and when earning contract, prices go down as well. Earnings are still growing, but the rate of growth has certainly flattened recently.

Similarly, lower interest rates, as expressed by the Fed Funds rate in the chart above to the right also correlate to stock prices. Stock prices can certainly rise while the Fed is raising its Fed Funds rate, but only for a time. Invariably the Fed raises for too long, the economy starts to lag, and stock prices fall. The data to the right indicates, upon close examination, that the Fed has usually ceased hiking prior to the market’s top, but that rate cuts have come too late to sustain the bull market. In other words, Fed rate cuts historically come too late.

We often say in these pages that it is never different this time. We still believe that. Yet in the world of TINA, bulls can make a pretty good case for prices to continue higher. Bad news could conceivably force the Fed to lower rates repeatedly. Lower interest rates make competing investments less attractive, and could ultimately reignite the economy before the market corrects. This is a heck of a needle to thread, and there is little history of the Federal Reserve successfully doing this. But there is little history of what happens to stock prices when rates are near zero for a prolonged period of time. The Fed is making it pretty clear that rates are going lower, and thus stock prices will likely go higher for the foreseeable future.

TINA will work in favor of stock prices until and unless earnings collapse. Bulls hope that the Fed can continue to stimulate growth. This is already the longest economic expansion in at least the last century. Some like to say that bull markets don’t die of old age. But they do. Cycles run their courses. The Fed can influence the duration of these cycles, but not do away with them. The business cycle has not been eliminated by Fed policy. If it has, it really is different this time. In the short run, the old Wall Street adage “don’t fight the Fed” likely applies. In the long run, Ben Graham’s adage is more apropos – “In the short run the market is an adding machine. In the long run it is a weighing machine”. It may be different for a while, but it is never different this time.

The opinions expressed are those of the Fund’s Sub-Adviser and are not a recommendation for the purchase or sale of any security.

The Fund’s investment objectives, risks, charges and expenses must be considered carefully before investing. The prospectus contains this and other important information about the Fund, and it may be obtained by calling 1-877-743- 7820, or visiting www.castleim.com. Read it carefully before investing. Distributed by Rafferty Capital Markets, LLCGarden City, NY 11530.

The risks associated with the Fund are detailed in the Fund’s Prospectus. Investments in the Fund are subject to common stock risk, sector risk, and investment management risk. The Fund’s focus on large-capitalization companies subjects the Fund to the risks that larger companies may not be able to attain the high growth rates of smaller companies. Because the Fund may invest in companies of any size, its share price could be more volatile than a fund that invests only in large-capitalization companies. Fund holdings and asset allocations are subject to change and are not recommendations to buy or sell any security.